Can't get past user input in Mario 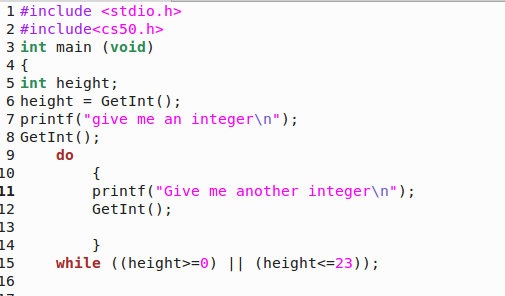 Can't understand why this doesn't print nothing when I give the integer within the parameters...just keeps asking for an integer no matter what the user input is

a do..while loop executes the code in its body at least once then keeps executing it as long as the continuation condition is true.

this means that you want the continuation condition to be true (you want the loop to repeat) if the user enters a value that is not between 0 and 23 and false otherwise.

this condition is true if and only if n < 1 AND n >= 23 which doesn't really make sense and is always false — how can n be less than 1 and greater than or equal to 23 at the same time?

also according to the specs, 0 is a valid height.

Edit #1: okay. let's try approaching things from the beginning. the problem is that we need to keep asking the user for input until he/she provides valid once.

when something involves repeating an operation again and again, we're typically talking about a loop. in C, we have 3 kinds of loops

for loops and while loops are similar in the sense that initially their conditions are checked first and if it's evaluated to true, their bodies are executed and the process repeats. if the condition is evaluated to false, they terminate.

of course for loops are different from while loop as for loops have headers. a for loop header consists of 3 main sections within parentheses after the keyword for. these sections are initialization (executed once at beginning of the very first iteration), condition (checked at the beginning of every condition), and update (where you update a variable in order to make the condition evaluate to false eventually and thus the loop terminates).

since we're always gonna need to ask the user for input at least once, a do..while loop is a perfect choice in this case. the question now is: when do we want our loop to execute again? according to the specs, we need to keep asking the user for input until he provides an integer value in [0, 23].

so we need our loop to keep executing as long as the input is less than 0 or greater than 23. let's write some pseudocode

there is something missing here. we need to take input from the user only once at a time, so store the value that they're providing in each iteration in order to be able to test whether this value is valid in the condition.

another thing is that we need to get input from the user (specifically an integer input). luckily for us we have a function in the CS50 library named GetInt that does exactly that for us — it asks the user for integer input, ensuring it's an integer, and returning it.

as GetInt returns the user input, we need to store it in height. so we use the assignment operator (i.e., =). for example

assigns the value returned by GetInt to the variable named i. with that, we may now have a complete version of the pseudocode

(1) if the condition of a for or a while loop is initially evaluated to false, the body is never executed.

Not the answer you're looking for? Browse other questions tagged pset1 mario input .