Try any of the following tweaks:

You may follow the steps here to install the guess additions.

After you have installed your Linux Guest system, there are a few additional packages needed for the Guest Additions. These packages enables you to create kernel modules.

You have to make sure that the kernel-headers and/or kernel-source are of the same version as your running kernel. It's best to do a full system update and reboot before trying to install the Guest Additions. Additionally, installing DKMS before the GA is also recommended so you don't need to manually install the GA again after a kernel update. Note: Not all distributions have DKMS in their repo. Either continue without, or install them manually from source.

Now that we have what is needed for the Guest Additions, it's time to actually start installing what we want. If you haven't done so already, mount the GA ISO to the VM. This is done using the Device Menu, then click on Install Guest Additions. See the screen shot. 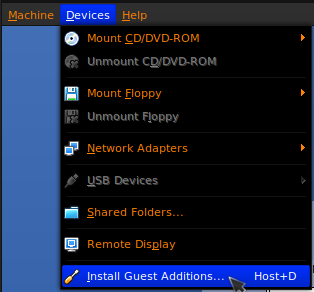 Make sure that no other CD is already loaded for the VM, like the install disk. Unmount that one first. The CD doesn't always get mounted automatically, so you have to do that manually. Usually an icon appears on the Desktop with the name of the inserted CD. You can mount the disc from there, but if you don't have a GUI, you have to mount it using the command line. The CLI can also be used if you have a GUI. Use a terminal emulator for that. In the CLI, check if there is a valid mount point for the CD. This is usually /media/cdrom, but any empty folder can be used as mount point. Now to mount the CD, issue the following command:

It's now mounted on /media/cdrom.

So, the CD is mounted. It should come up with a message about content that can be run from the CD on newer releases of the distro you use. This is usually a Desktop Manger or file manager setting, so not all Desktop Managers have this. Gnome, KDE and Xfce should have it, but I'm not sure if it's enabled by default. Accepting the autorun should install the GA now.

If there is no autorun message, or you don't trust it or want to do it manually, follow the steps below. Go to the folder with a terminal (this can be easily done from a graphical file browser (like Nautilus (Gnome), Thunar (Xfce) or Dolphin (KDE)) by right-clicking on the folder and select "Open Terminal here", or use cd /path/to/cdrom). In that folder, check it's contents with the ls command, so you are certain you are at the right place and you know the file names. Depending on the architecture you run for the Guest (32 bit or 64 bit), you run one of the two commands:

Since 4.0, the Guest Additions are merged into one, architecture independent package, so it will be as follows:

The Additions should install without issues.

Just install the guest additions, and then click on the machine tab and make sure that the auto-resize is selected. Then you can drag the windows size with the mouse or do a (crtl + F) to go full screen. It is all in the VBox Users guide that came with the program.

If your'e wondering how to install the guest additions, open the guest and at the top left of the window click device tab and then click install guest additions. In case your'e more comfortable with a command line interface, see Kareem Mesbah's Link.

Not the answer you're looking for? Browse other questions tagged appliance .