When my ball collide paddle, i got segmentation fault

I am trying this error for hours, checked many segmentation faults, tried various code but i can not figure out why this is happening. 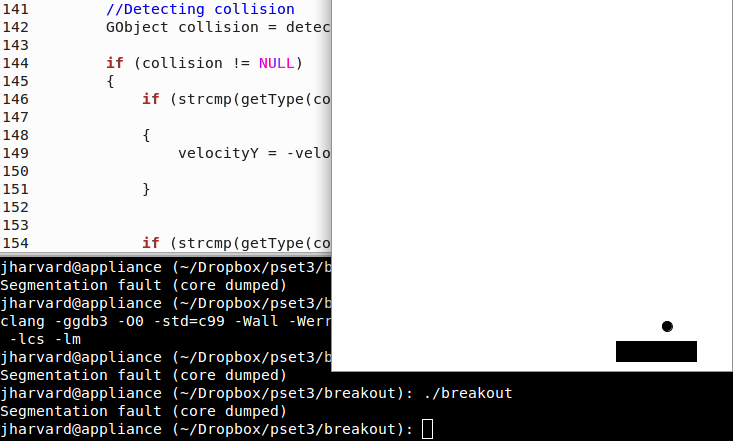 update: This way ball does not bounce off bricks.

You have two misconceptions.

According to man strcmp

The strcmp() function compares the two strings s1 and s2. It returns an integer less than, equal to, or greater than zero if s1 is found, respectively, to be less than, to match, or be greater than s2.

So strcmp takes as inputs, two strings. But if you look at your second parameter, it's paddle, which if I am correct you have declared as a GRect, not a string. That's why you get the segfault.

Returns the subtype of the object as a string, as in "GOval" or "GRect".
Usage:
type = getType(gobj);

So if the ball touches the paddle, detectCollision() will return the GObject paddle which you assign to GObject collision.

Now if you do getType(collision) and collision is indeed paddle, getType() will return "GRect", which is a string of the type of the GObject you gave as input.

So you should strcmp() for "GRect", not paddle or brick, and then compare collision to paddle. If the "GRect" touched wasn't the paddle it must have been a brick, so you act accordingly.

Your problem lies on the following lines

Unlike initPaddle() which returns a GRect, (which you later assign to ball), initBricks() has a return type of void, so it doesn't return anything back to keep track of the bricks in your GWindow.

That essentially means there is no variable brick for a brick. There is a

probably, somewhere inside your initBricks() function, inside a for loop to instantiate the bricks, but you change the same brick variable with the latest GRect. You don't keep every brick you create, only the last (and you shouldn't). Also the reference to this last brick is also lost when initBricks() returns.

Now, even though there is no reference for the bricks, they are still in your GWindow, and through detect collision you can get their reference back. But you just can't use brick.

So every time you detect a collision with a GRect, first check if it was the paddle, if not, you don't have any other GRects in your GWindow, so it has to be a brick, and hence you can just remove the collision from the GWindow.

If this answers your question please accept it by clicking the gray check-mark to the left, so that it becomes green. You can also vote it up by pressing the up arrow above the check-mark. And don't forget to keep coding!

Not the answer you're looking for? Browse other questions tagged pset3 breakout .

2
Why Do I Get a Segmentation Fault When Trying to Move the Paddle?
1
Breakout - bounce off brick- why do I need to check for object == NULL?
0
Pset3, detect collision, paddle not ‘colliding'
0
pset3 Ball not detecting bricks
1
Strange interactions between paddle and ball in Breakout
0
Pset3 breakout issue with the while live > 0 && bricks > 0
0
Segmentation fault when calling updateScoreboard
0
Breakout: paddle no longer moves after ball movement inserted
0
pset3 detectCollision doesn't return NULL if there is no collision detected