all I understand about the unload function is that I should traverse every children node in a node with a loop and check if they point to NULL. if so ,the node will be freed and make it point to NULL.if we found a children node that doesn't point to null, I call the recursive function again. at the end, root points to NULL. I'm using a trie structure a dictionary and the root is a global pointer. the problem is that the function doesn't work properly . valgrind shows me that i have 14 alloc and 13 frees. so here's the recursive function and the unload function

and that's the trie structure

valgrind shows me this 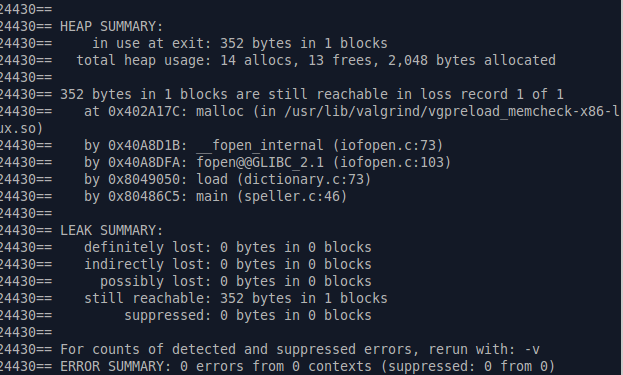 Ok, a couple of notes first to clear the field. Starting from easy:

According to man 3 free:

The free() function frees the memory space pointed to by ptr, which must have been returned by a previous call to malloc(), calloc(), or realloc(). Otherwise, or if free(ptr) has already been called before, undefined behavior occurs. If ptr is NULL, no operation is performed.

It is nowhere said that when the memory pointed to by ptr is free()d, ptr is also set to NULL. ptr will keep pointing to this place in memory even though the memory has been free()d.

Now as you see you have declared root as node *. So root is a pointer to a node, not a node itself.. In your unload() you make a node* temp point to root. What this means exactly, is that now temp points to the same point in heap root points. They are not the same pointers. If I make temp point to NULL, root will be still pointing at the same place in heap, it won't get NULL too. That's why, when you pass temp in free_memory(), even though that pointer, passed by value, points to NULL, the temp in unload() still points where root points. Let me make it a little more clear.

I integrated your unload() function in place of mine, and I used a dictionary with the words cat and caterpillar inside. valgrind reports:

So you allocate one more time somewhere in your code and you don't free() that memory. Maybe somewhere inside load()? To see where this allocation is happening, run:

replacing [dictionary] and [text] of course.

So after all, your unload() works great, if you change the following:

Let me know if you pinpoint your problem or you need more advice.

If this answers your question please accept it by clicking the gray check-mark to the left, so that it becomes green. You can also vote it up by pressing the up arrow above the check-mark. And don't forget to keep coding!

Passing temp to free_memory() might not change temp to NULL. (Hopefully someone smarter can confirm via comments, or a better answer)

Perhaps change free_memory() to node* type and make it return NULL; when it hits the end:

Then just update unload() to:

Then see how it goes in valgrind?

If this answers your question please accept it by clicking the gray check-mark to the left, so that it becomes green. You can also vote it up by pressing the up arrow above the check-mark

Not the answer you're looking for? Browse other questions tagged speller unload .