Why Am I Getting These Symbols Printed Out?

I'm working on mario trying to print hashes and spaces, but rather I get these symbols printed out instead 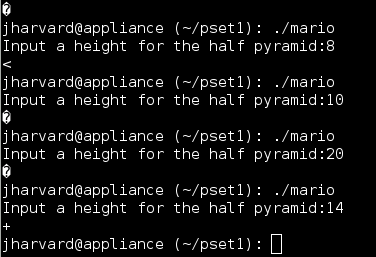 Why am I getting these symbols?

chars are really numbers underneath the hood. That means, when you add them to each others using the addition operator (i.e., +), you're really adding their ASCII values.

If you tried to print any unprintable character or an invalid value as a char, you'll probably get these symbols printed instead.

You may have a look at this answer to get some sort of an idea about how you should solve mario!

1
What's wrong with my code for mario?
-1
mario.c-printing of pyramid tower

0
Need help with code for mario
0
Why are my for loops being skipped? (mario)
0
Trouble with variables updating every time a loop runs (mario)
0
PSET1 Mario - nested loops for printing #s and spaces
0
What do these check50 errors mean in mario?
0
Mario.c hashes pyramid
0
pset1 Mario trouble
0
Help with Mario's half-pyramid
0
Problem with printing the # symbols on mario.c