I am working on mario.py and the code compiles, except when I run it, it keeps prompting the user for an integer and does not print out the pyramid.

I know that there is something incorrect with the for loop that I've written for printing out the pyramid. I tried to nest two while loops within a for loop except I'm not sure where the problem lies. 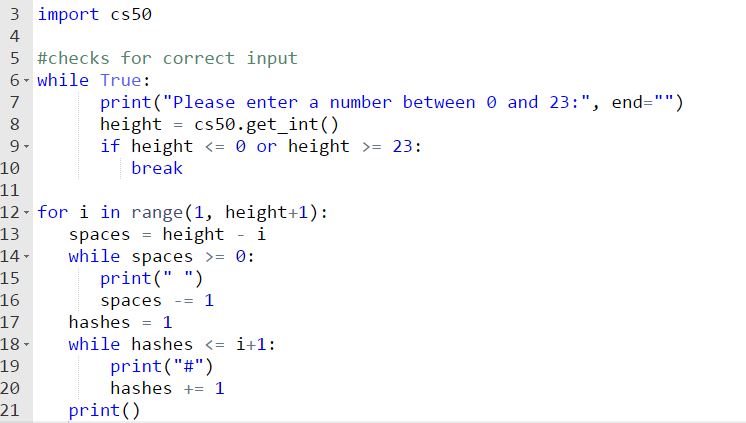 I was wondering if anyone could tell me what is wrong with my code, I would really appreciate it.

First: DO NOT POST CODE AS IMAGES. Post as text, there's a {} button in the editor you can click after selecting the code, which will add four spaces in the front, which tell markdown to format as code. Surely is not nearly as beautiful (no line numbers for example), but one could copy that code snippet to own code and try it out. Or use a service like pastebin or GitHub's gist, but no images, please.

Also, it would have been great if you told us where and in which way the code behaves in an unexpected way. Just identifying and describing the problem and what the code is actually meant to do might help solving the problem yourself.

You are slightly wrong in implementing this one:

Should be height >= 0 and height <= 23, as that's the condition to leave the loop. Also notice that 0 and 23 are valid values according to the task description.

Your while-loops with in-loop increment could be for-loops, which are much easier to read:

If you want to print single characters (you don't have to, Python supports simple string concatenation, which allows for a single print per line or even for all lines), you'd have to add , end="" to your print commands, just like you did for the first one, to prevent it from automatically printing a newline.

Python has some nice syntax for repeating strings or array content, so you wouldn't even need nested loops: "#"*(i+1) repeats "#" i+1 times.

Not the answer you're looking for? Browse other questions tagged pset6 python mario.py .