I can't seem to figure out what I'm doing wrong here. I'm getting the following error for the code below. Any ideas? 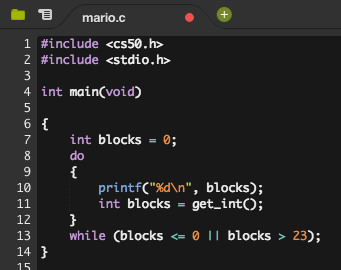 With your usage of int you're creating a new variable. Example:

The int blocks = 4 variable lives only inside of the block {}, it's inside the block's scope and can only be accessed within the block scope.

You can achieve the result you want by simply not using the int keyword in your do..while loop, that means you're not creating a new variable and you can access blocks outside of the loop. Example:

Not the answer you're looking for? Browse other questions tagged pset1 mario .