pset6 similarities substrings fails check50 in 3 cases, but not sure what's wrong with logic

My code isn't efficient, but it's not convoluted which is rare for me. I wrote a helper function, 'slicer', which iterates over the length of a and slices a into length n substrings. 'Substrings' calls 'slicer' makes a and b sets, uses .intersection to get the substrings in common, and then checks for any substrings less than length n and removes them, or that's the idea behind it. Because the substrings shorter than n are pulled out by an if statement, it didn't seem to matter if 'slicer' ran the entire length of a: 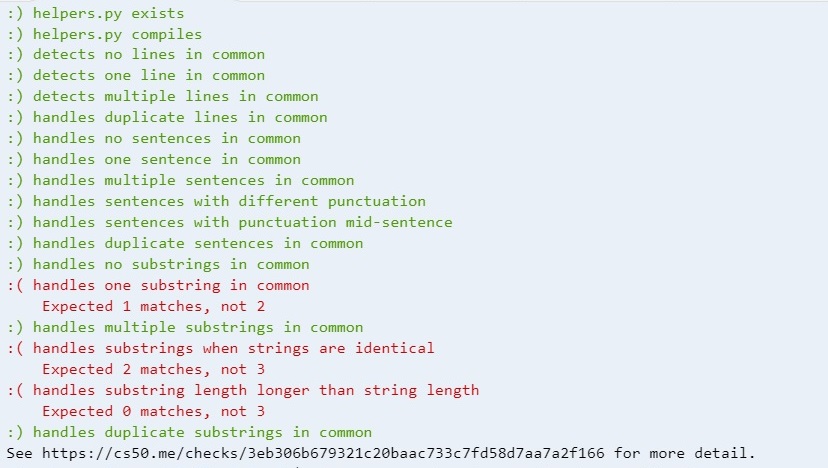 The 'more detail' link is helpful...

but I can only reproduce 2 of the 3 errors--1 substring in common looks ok to me:

It's returning substrings shorter than n, but I don't know if it's because the if statement is wrong, if slicer iterating thru the entire length of a is behind it (defining the range in terms of n makes the if statement unnecessary, but doesn't help me understand what's wrong), or if the overall approach is just bad. Maybe if the if statement were in slicer, but I don't understand why it would make a difference. This is where I really miss the gdb debugger. Thanks in advance for any help.

And never change the iterable you're iterating over (like your "fix" does), this can have all kinds of effects. Most likely, removing current element will skip the next one. Stack Overflow question https://stackoverflow.com/questions/8544559/how-to-correctly-modify-the-iterator-of-a-loop-in-python-from-within-the-loop has a few answers how one could fix it. But I'd try avoiding the stuff instead, especially if it's that easy.

Not the answer you're looking for? Browse other questions tagged pset6 less similarities substrings .