For mario less comfortable, I did it correct but i do not understand the logic behind it

my code for mario less comfortable is correct. But I got the answer by trying out different value multiple times. And after I finally got the correct answer, I do not understand the logic behind it. My code looks like this: 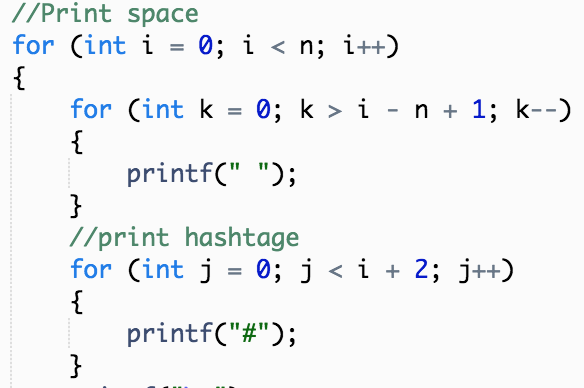 I'll try and explain this in the most beginner-friendly way possible. Take note that I did make some assumptions because you did not include the full code:

Now, I don't expect you to completely understand this simplified explanation because I am typing this in text form. If you do want to truly visualize the logic, I suggest you use debug50. It's a super-helpful tool that's given to you by the course if you want to do some in-depth monitoring of how your code's doing. You're supposed to use that in week 2 though, so until you're accustomed to using it, you should proceed and come back when you've got the hang of it.

0
Pset1 : the mario question. I don't understand the logic of my own solution, it just doesn't make sense (found it by randomly playing around)
0
I'm sorry for another Mario question, but I'm stuck on the second half and have read the questions asking for help
1
How can I improve my code for pset1 mario?
1
Pset1 Greedy, Can not get my logic correct
1
Pset1(mario.less)- What is the logic behind my approach?
0
:( mario.c compiles this looks like a compiling error
0
PSET 1 Less Comfortable Mario (Right Sided Pyramid) Got it right by luck, don't understand what I coded
0
pset1 Mario more comfortable check50
0
My 'pset1 Mario more comfortable' is returning check50 errors whilst seemingly correct
0
PSET1 Cash - less comfortable - errors only for 0.41, 0.15