Whenever I type Make Mario into the Terminal for the "More Comfortable" Mario.c assignment in Week 1, it keeps telling me I have an error on 13:9 - but there's nothing typed on 13:9. I'm a bit mystified... 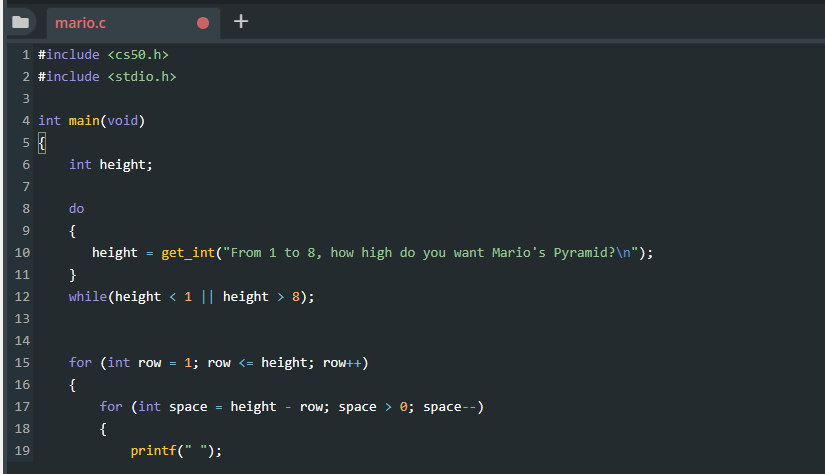 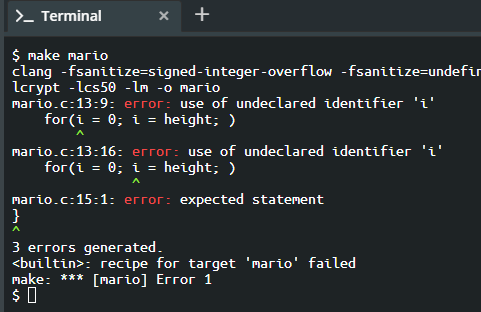 Any idea what is going on?

Or, have you edited the file but forgot to save it and the compiler is still trying to compile the earlier version of the file? The IDE doesn't autosave changes. You must save the file to disk.

These are two very common mistakes made by new programmers. ;-)

Not the answer you're looking for? Browse other questions tagged mario error identifier undeclared .

0
Pset 1: Mario Output Looks Correct When I Run the Program, but CS50 Check Indicates That It is Wrong
1
Approaching pset1?
5
Error: “make: *** No rule to make target `mario'. Stop.”
0
I'm sorry for another Mario question, but I'm stuck on the second half and have read the questions asking for help
1
pset 1, clang error in make hello
0
Mario.c : having problems with SCOPE and iteration. Very new to coding
0
mario_error: expected identifier or '('
0
Not In Directory In Terminal Window pset1/mario/less
0
Problem Set 1 - Mario - Less Comfortable - 'expected identifer or '('
0
Can't submit or check