I've been stuck on this for quite some time and did a lot of research on the AND operator in SQL, but no matter how many variations I try I cannot get my table to output just 6 rows, with each row containing a movie that both Johnny Depp and Helena Bonham Carter starred in. I believe my table instead outputs 92 rows for the movies that both of them have been in in general, rather than together. Here is my code:

Here is the output message:

And here is the resulting table itself (96 rows total): 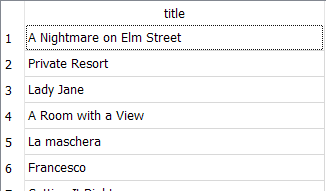 Any suggestions or ideas to output just the movies the two starred in (six rows total) would be greatly appreciated.

Using a previous post on this forum, I was able to deduce I had to use the INTERSECT operator, which instantly solves the problem.

Not the answer you're looking for? Browse other questions tagged pset7 sql mysql movies .