Error Code - Use of undeclared identifier in PSET 1, Mario

An error code popped up while trying to compile my code, saying that the variable n had not been declared earlier. It had been declared however at the beginning. Here is the code and the terminal statement. 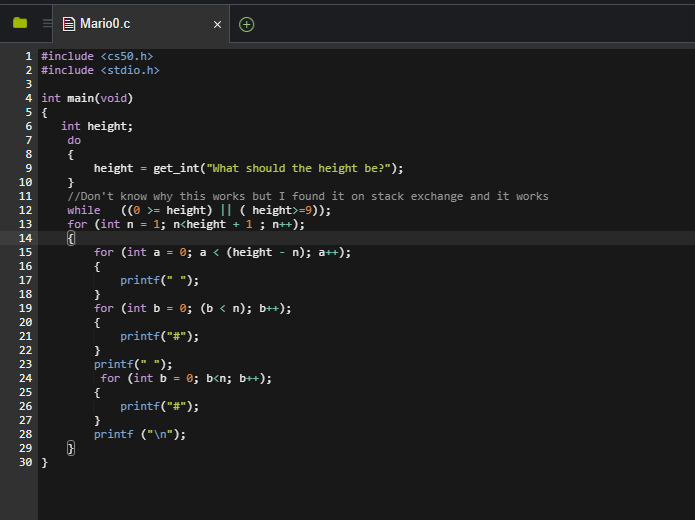 . At the same time it says that my loop has an empty body, but doing research I don't know how to remedy that, as my loop clearly has a defined course.

All errors are that you end each for loop with a semicolon, delete it. By the way the screenshots are not very useful, if it were necessary to reproduce your errors, no one is going to recopy your code by hand.

Not the answer you're looking for? Browse other questions tagged pset1 mario .

3
How to Declare and Initialize Variables in C?
1
mario step 1 getting undeclared identifier error
0
Code Debugging: Help?
0
In pset1 greedy, I try to use a while loop to reprompt invalid input. But it simply exit the script when invalid number is entered
0
Typecasting doesn't work as expected in pset1
0
Have looked all over the web. Can't figure out: Error: expected identifier or '(' {
0
Can I declare a variable *within* a do-while loop?
0
Error of Undeclared Identifier in the for loop
0
I keep getting error: use of undeclared identifier 'n' when trying to compile mario.c. I am new to coding, my code is shown below