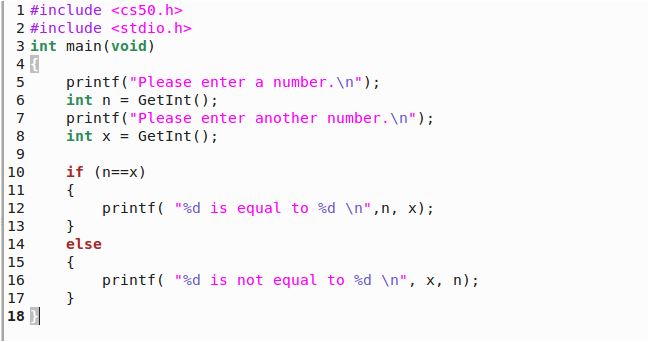 Take a look at this style guide and see if your code meets it. Also you may use style50 which is a tool in the CS50 appliance that guides you to have a better coding style. Execute

Assuming that there's a source code file, test.c that fells under the home directory.

Indentation! Its just for the sake of your code to look beautiful. Even if write code in a badly indented way, it won't effect your grade. It has nothing to do with what exactly your program does. So you are free to choose any the indentation style you wish, and not bound with a particular one for submission of psets.

Indentation is not a requirement of most programming languages, where it is used as secondary notation. Rather, programmers indent to better convey the structure of their programs to human readers. In particular, indentation is used to show the relationship between control flow constructs such as conditions or loops and code contained within and outside them. However, some programming languages (such as Python and occam) use the indentation to determine the structure instead of using braces or keywords; this is known as the off-side rule, and in these languages indentation is meaningful to the compiler, not just a matter of style.

Indenting your code is a good habit because it helps your fellow programmers to understand it well. And since there is no indentation sensitive programming language in the course, we are free to use it anyway, Wikipedia has mentioned a number of such styles.

Talking about your code snippet, it is indented properly, you used Allman Style, me too personally prefer the same, but again that depends on what conventions your colleagues follow.

Not the answer you're looking for? Browse other questions tagged pset1 c .

0
Where is unistd being used in this CS50 example (is it superfluous)?
0
Is this what the Mario project should look like?
0
My server.c parse function fails in cs50 check
0
pset1 greedy, help pleeeease
0
Help needed for pointers in C
0
Stumped on pset1 cash.c, please help me learn
3
Which loop can be replaced for nested for loops for PSET 1 (Mario More Comfortable)?
0
Errors while check50 in Pset1 mario less, expecting suggestions
0
Need help with CS50's Filter (less) Blur