My function that frees the memory works properly; the problem lies in node creation. I now have a separate problem where the program segfaults when run normally, but it cannot be reproduced in gdb or valgrind. However, that is a separate question altogether.

I have since found out that this segfault happened because I did not check for the EOF character properly. As per Cliff B's answer in this question, the check for EOF happens only after the last character in the file. As a result, in my load function, I had assigned the last character of the file to some i (which in this case was -1 according to a printf call), and tried to create and access a child node that was not between 0 and 27 (each node in my trie structure has 27 node*s). This caused a segmentation fault, and also caused problems with my unload function, which would not unload the very last node I created.

While stepping through my load function, I notice an unexpected behaviour. I believe the problem lies somewhere in these lines of code, which are embedded within a for loop. The casting to (node*) is just to be safe, though it does not affect the running of the code to my knowledge.

While stepping through the load function, I see that my current_node->children[i] seem to be calloc'ed properly (all children set to NULL), but the moment I step into current_node->children[i] and examine its children, I see that the addresses get screwed up. Specifically, the i'th child in the children node gets set to 0x0 for some reason. Can anyone shed light on how this might happen? 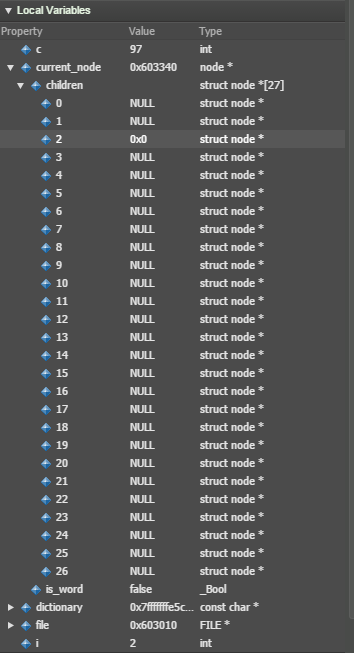 So I somehow borked my code after it worked properly previously (though, it only ran well in gdb and valgrind but segfaulted when run directly). The problem seems to be in the function that frees my trie, which unload calls using free_all(root). It will run into a segmentation fault, but not immediately.

Here is my function, with some temporary printf calls for debugging purposes:

Here is the valgrind summary:

I seem to have more calls to free than allocs, but printing the number of nodes tells me otherwise. However, I think this is causing the problem, but I cannot figure out how it happens.

My nodes variable is an unsigned int, which is initialised to 1, and then incremented by 1 every time I call calloc. Here is an excerpt of my load function where I increment nodes:

Good news / bad news kind of answer. I plugged your free_all() function into my code and tested it with a small dictionary and input file, along with the default large dictionary and holmes.txt. The result is that it worked flawlessly. It freed every node and valgrind reported no leaks.

In light of this, I would say that you have a problem in load. Somehow, something is probably going wrong in your trie as nodes are being added. Without seeing the load code, it's difficult to see where the problem lies.

If this answers your question, please click on the check mark to accept. Let's keep up on forum maintenance. ;-)

Not the answer you're looking for? Browse other questions tagged pset5 valgrind unload segfault .

1
pset5 load function segfault do not show in gdb